The Importance of Positioning & Dynamic Movement

Every day I see players with solid execution of their shots. I also see these same players lose a significant amount of points because they are in the wrong position. Not usually on the first ball, but the second or third ball of points. This scenario usually consists of players either not moving, or moving to a point of no return. 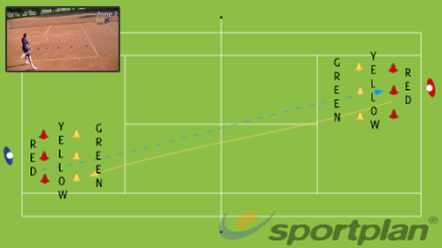 Therefore lowering the percentage of points that they win in these situations. Generically speaking, most players have the right idea when it comes to where and what they should be doing when hitting certain shots. However, they frequently forget to “reset” and maintain continuous movement. The reason this is so very important is because of the limitless variables that tennis can offer. Imagine a game of chess where you must make your next move within a second, or you lose your move. Tennis is like a constant cat and mouse game and the quote, “The best-laid plans by mice and men often go astray” couldn’t explain the game better. In other words, you have to be versatile in your executions of different shots and strategies.

Lets say your playing a point and your goal is to be aggressive. You move in off of an approach shot, take your first volley moving forward and your opponent is wounded on the dead run. You are ready to finish this point when, BOOM! You get lobbed and lose the point. (You moved forward too much, too soon because you hit a couple solid aggressive shots.)

Lets say you learned your lesson from the last point, and this time you are going to play it safe. You know you need to come in attack this opponent,as they are more consistent than you. So this time you come in off an approach shot again, and decide not to close in as far because your opponent has good lobs. You hit a volley or two and then BOOM! Your opponent hits it right at your feet forcing you to pick the ball up, and takes it out of the air for a winner. (You didn’t trust your shots and positioning in this situation. Definitely move forward against these players, but be mindful of the one you choose to close in on. After that, make sure you reset.) ALWAYS expect the ball to come back!

Of course there are endless scenarios I could make up about this, but you get the point. The player I made up cannot be beaten! All jokes aside, my point is that there is always a statistically proven position to be on the court after every shot that will maximize your chances of winning that point. I am not saying you will win every point that you get in the proper position, but you will certainly increase your chances.

I could go on all day about this, but here is my conclusion.

Different coaches may split the court differently, but I split the court into 8-10 zones depending on a couple different factors, but for now I’ll give you three to think about. The first three zones are at the net and they will horizontally split the service boxes into thirds. The first is at the service line, the defensive zone. The second is in the middle of the box (neutral/looking to attack.) The third is in the front third of the box (point finishing/poaching.) Believe it or not, you will hit 70% of your volleys in the service line zone (zone 1.) Basically, you will want to move forward a zone if you hit a good volley, and backwards if you hit a bad volley. This happens with a forward split step, or backward split step, not just a charge or a retreat. You should NEVER stay in the finishing zone (zone 3) for more than one ball. Ideally you will want to be in a constant rhythm of movement throughout all of these zones, each and every point.

It will take time to master the movement throughout these zones and anticipating your opponents next move, but if your are constantly moving and resetting in these different zones according to your shots and your opponents shots, you will surely be in a better position to close out points. Try to make a note of not staying in any one zone longer than two shots (at the net.)

For a visual of “Zones,” which is nothing new. I just break them down a little differently. Please see the picture below. Keep in mind that the “Finish zone” in this picture is split into three pieces.

This entry was posted in All, General Tips, Net Play. Bookmark the permalink.